Hello, and welcome to my quotes blog. This month's theme for the Scrap Twist Blog Train is Friendship, and instead of offering a kit with papers and elements, I decided to make a kit of printable quotes -- which is why I'm posting it here rather than on my Dancing Tiger Designs blog.

This month's theme, palette and twist were chosen by Karen from KJDdesigns, and here is the palette she chose for us to use:

July's twist was to create an item to represent our state or country. I live in Australia, and chose to "twist the twist", you could say! The colours that sports teams wear when they represent this country are green and gold, so I have used the yellow and green in the palette to reference this. There are 10 quotes in the kit, and each one is 8 inches x 10 inches in size. I decided to only show a couple of them on the preview, so that you could get a better idea of what they look like. 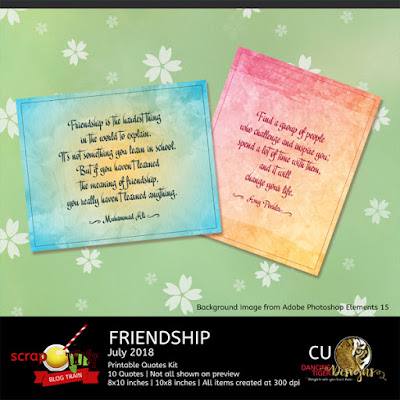 August's blog train will be another
month-long daily download,
back on my design blog:
Dancing Tiger Designs

Hello, everyone! I haven't been very good with offering printable quotes here, have I? I'm going to try to do better this year, and the first quote I have for you is part of this month's Pixel Scrapper Blog Train "Flower Power". The download link is below the preview: 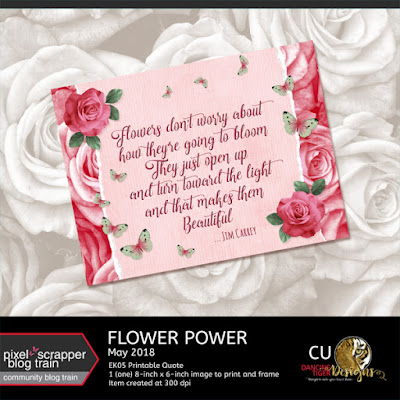 I promise not to leave it so long for the next printable quote!

I finally have a new printable quote for you, and it is a very special one, written in 1932 by an American woman, Mary Elizabeth Frye. Margaret Schwarzkopf, a young German Jewish woman, was staying with Mrs Frye and her husband; she was concerned about her ill mother, who was still living in Germany. Margaret had been warned not to return home to Germany, because of the increasing unrest there. Sadly, she never saw her mother again, as she died not long after. A heartbroken Margaret said to Mrs Frye that she had never had the chance to "stand by my mother's grave and shed a tear".

This was the inspiration for the poem below, first written on a brown paper shopping bag: 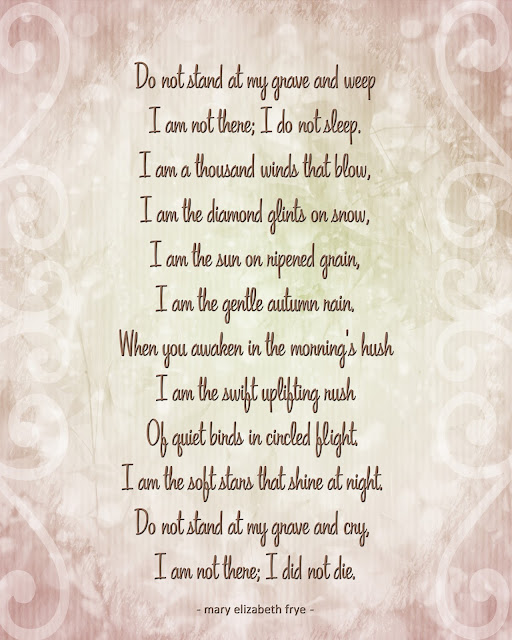 FINAL NOTE: This poem, often read at funerals, was introduced to the United Kingdom in 1995, when the father of a soldier read it on BBC radio in memory of his son. The soldier had been killed by a bomb in Northern Ireland, and had left the poem among his personal effects; in an envelope simply marked: To all my loved ones.


If you love someone, they never really leave you;
for, as long as you hold them in your heart, they are with you always.
Posted by Robyn Denton at 17:44 2 comments:

In case anyone has been wondering why I haven't posted any more quotes here - I'm so sorry, but I'm having internet problems, and am waiting for them to get fixed. I can post and comment, but can only download if it's a very small file - and I can't upload at all. My internet is only working to about 20% of what it should be, and is constantly dropping out. My provider said a technician would need to investigate further to find out what is going on (or what's not going on, I should say!)

So, please bear with me, and I'll be back as soon as I possibly can!
Posted by Robyn Denton at 20:56 No comments:

Would you like to download printable versions of the quotes I will be featuring on this blog? I made this one for you to try out - let me know if you would like more like this. (This one measures 8 inches by 6 inches.) 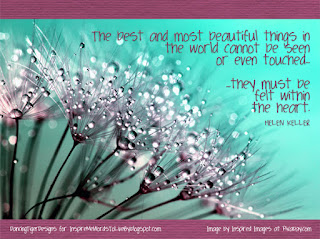 The best and most beautiful things in the world cannot be seen or even touched... They must be felt within the heart.
[HELEN KELLER]

Posted by Robyn Denton at 21:51 No comments:

The purpose of this blog is for me to share my favourite quotes, proverbs, sayings, and other words of wisdom with you.
Posted by Robyn Denton at 21:19 No comments: